Twisted Metal is a vehicular combat video game developed by SingleTrac, produced by Sony Interactive Studios America (now 989 Studios) and published by Sony Computer Entertainment for the PlayStation. The game was released in North America on November 5, 1995, in Europe on January 13, 1996 and in Japan on November 15, 1996. The North American version was rereleased for the Sony Greatest Hits line-up on March 3, 1997.[1] It is the first installment in the Twisted Metal series. The game's plot is centered on the titular competition in which various drivers in modified vehicles must destroy the other vehicles in an attempt to be the last one alive. The winner meets the organizer of the competition, a mysterious man named Calypso, who will grant the winner a single wish, regardless of price, size or even reality. 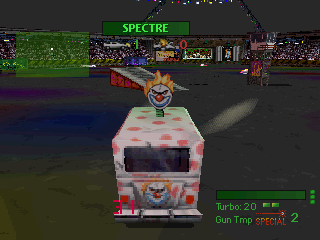