Twisted Metal III is a vehicular combat video game developed and published by 989 Studios for the PlayStation. The game was released in North America on October 31, 1998 and was re-released for the Sony Greatest Hits line-up in 1999.[1] It is the first installment that was not released in the PAL regions.

Twisted Metal III is the third installment in the Twisted Metal series and the first installment to be fully developed by 989 Studios. The game's plot is centered on the titular competition in which various drivers in modified vehicles must destroy the other vehicles in an attempt to be the last one alive. The winner meets the organizer of the competition, a mysterious man named Calypso, who will grant the winner a single wish, regardless of price, size or even reality.[2]

Twisted Metal III received generally mixed reviews from critics, who criticized the game's level design and physics engine but commented positively on the multiplayer gameplay and soundtrack by Rob Zombie and Pitchshifter. However, the game was commercially successful, selling 1.14 million copies in the United States alone.[3] 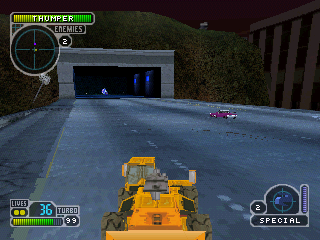