Theme Hospital is a business simulation game developed by Bullfrog Productions and published by Electronic Arts in 1997 for the PC in which players design and operate a privately owned hospital with the goal of curing patients of fictitious comical ailments. The game is the thematic successor to Theme Park, also produced by Bullfrog, and the second instalment in their Theme series, and part of their Designer Series. The game is noted for its humour, and contains numerous references to pop culture.

Peter Molyneux and James Leach came up with the idea of creating a Theme game based on a hospital, but Molyneux was not directly involved in development due to his work on Dungeon Keeper. Designers originally planned to include four distinct gameplay modes corresponding to historical time periods, but this was dropped due to time pressures on the team. Multiplayer support with up to four players was added in a patch. The game received a generally positive reception, with reviewers praising the graphics and humour in particular. Theme Hospital was a commercial success, selling over 4 million copies worldwide, and was ported to the PlayStation in 1998. A Sega Saturn version was in development, but cancelled. The game was re-released on GOG.com in 2012 and Origin in 2015, and the PlayStation version was released on the PlayStation Network in Europe in 2008, Japan in 2009, and North America in 2010. Revival attempts have been made with the development of open-source remakes such as CorsixTH. 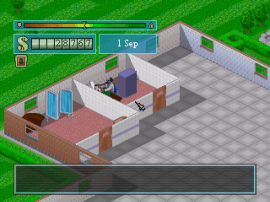