Silent Hill[a] is a survival horror video game for the PlayStation published by Konami and developed by Team Silent, a group in Konami Computer Entertainment Tokyo. The first installment in the Silent Hill series, the game was released in North America and Europe in February 1999 and in Japan in March 1999. Silent Hill uses a third-person view, with real-time rendering of 3D environments. To mitigate limitations of the console hardware, developers liberally used fog and darkness to muddle the graphics. Unlike earlier survival horror games that focused on protagonists with combat training, the player character of Silent Hill is an "everyman".[1]

The game follows Harry Mason as he searches for his missing adopted daughter in the eponymous fictional American town of Silent Hill; stumbling upon a cult conducting a ritual to revive a deity it worships, he discovers her true origin. Five game endings are possible, depending on actions taken by the player, including one joke ending.

Silent Hill received positive reviews from critics on its release and was commercially successful. It is considered a defining title in the survival horror genre, and is also considered by many to be one of the greatest video games ever made, as it moved away from B movie horror elements toward a more psychological horror style, emphasizing atmosphere.[1] Various adaptations of Silent Hill have been released, including a 2001 visual novel, the 2006 feature film Silent Hill, and a 2009 reimagining of the game, titled Silent Hill: Shattered Memories. The game was followed by Silent Hill 2 in 2001, and a direct sequel, Silent Hill 3, in 2003. 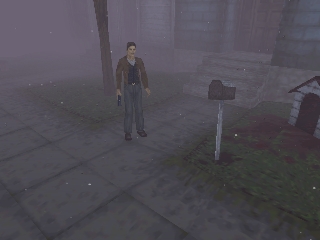