JoJo's Bizarre Adventure (Japanese: ジョジョの奇妙な冒険, Hepburn: JoJo no Kimyō na Bōken) is a fighting video game developed by Capcom based on Hirohiko Araki's manga of the same title. The game was developed by the same team who are responsible for the Street Fighter III series.

It was originally released in the arcade in 1998 on the CPS-3 arcade system; this version was known outside Japan as JoJo's Venture. An updated version of the game was released in 1999 as JoJo's Bizarre Adventure: Heritage for the Future (ジョジョの奇妙な冒険 未来への遺産, JoJo no Kimyō na Bōken Mirai e no Isan), becoming the sixth and last game released for the CPS-3 board. Console ports for the PlayStation and Dreamcast were also released that year. A high-definition version of the game was released on PlayStation Network and Xbox Live Arcade in August 2012.[1]

The game combines Capcom's trademark anime-inspired graphics, as seen in the Darkstalkers series, with the colorful characters and events of Hirohiko Araki's creation, resulting in a highly stylized and detailed visual style. It also features many of the gameplay mechanics seen on previous Capcom fighting games, such as the use of power gauges for super moves, as well as a brand new Stand Mode, consisting of the series' signature guardian spirits that accompanies almost every character and can be summoned or dismissed at will by the player, resulting in variations in the character's move list and abilities.

Original author Hirohiko Araki served as a consultant for the game and created exclusive pieces of artwork for its promotion and packaging; most notably, he developed from scratch a new character design for Midler, since Capcom was interested in using her in the game and she had been only shown from the waist-down in the original manga. 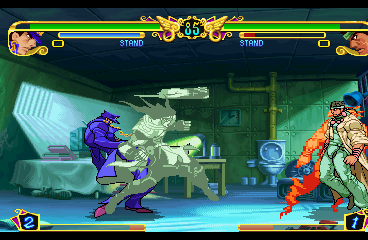