Harvest Moon: Back to Nature (牧場物語～ハーベストムーン～, Bokujō Monogatari Harvest Moon) is a video game in the farm simulation series Story of Seasons, developed and published by Victor Interactive Software. It is the first Harvest Moon game for a non-Nintendo console. Characters from Harvest Moon 64 were transferred to be the characters in this game, although with new lifestyles, personalities, and relatives. 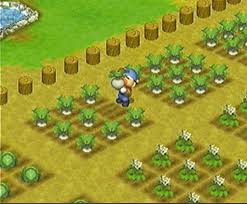