Gex: Enter the Gecko (also known as Gex 3D: Enter the Gecko or Return of the Gecko; or on N64 as Gex 64: Enter the Gecko) is a platform game released in 1998 for the PlayStation, Nintendo 64, Microsoft Windows, and the Game Boy Color. It is the second game in the Gex series, and involves collecting three types of remotes to unlock different TVs in the hub world that lead to levels, and to aid in the fight once again against Rez. The eponymous gecko protagonist is voiced by Dana Gould in the American version, and Leslie Phillips in the British release. 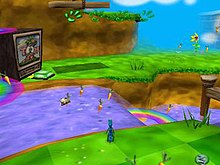