The game's story takes place immediately after the events of the second game. The ruins of a space station called the Cortex Vortex owned by Doctor Neo Cortex, crash-lands on Earth and unleashes an evil entity known as Uka Uka, Aku Aku's evil younger twin brother, who joins with Cortex and the time-obsessed Doctor Nefarious Tropy and they plan to gather powerful Crystals that lay scattered across time and use their energy to enslave the Earth. The game follows the main characters Crash and Coco Bandicoot as they travel through time and prevent the villains from gathering the Crystals by collecting them themselves.

Warped was lauded by critics, who noted a high quality in many areas, including gameplay, graphics and audio. The game went on to sell nearly 6 million units, making it one of the best-selling video games for the PlayStation. In Japan, the game surpassed the sales of its 2 predecessors and became the first non-Japanese PlayStation title to sell over 1 million copies in the country. A remastered version was included in the Crash Bandicoot N. Sane Trilogy collection for the PlayStation 4 in June 2017, and ported to other platforms in June 2018. 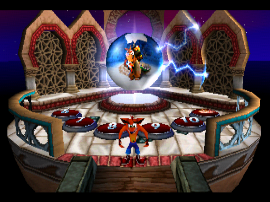