aprīlis 13, 2020
*Recommended to play on a PC or a powerful smartphone.
*Don't forget to use fullscreen
*Ability to play multiplayer
*Possibility to save the game
*Possible to play with a gamepad (and change controls)
*
About

Castlevania: Symphony of the Night[a][2] is a platform-adventure action role-playing game developed and published by Konami in 1997 for the PlayStation.[3] It was directed and produced by Toru Hagihara, with Koji Igarashi acting as assistant director. It is the direct sequel to Castlevania: Rondo of Blood, taking place four years later, and is the 10th entry into the Castlevania Series. It features Dracula's dhampir son Alucard as the protagonist, rising from his slumber to explore Dracula's castle which has re-appeared after Richter Belmont vanished.[4] It marks a break from previous games in the series, re-introducing the exploration, non-linear level design and role-playing elements first experimented with in Simon's Quest.

Initially, the game's commercial performance was mediocre[5] – particularly in the United States where it was meagerly publicized – but thanks to praise by critics, it gained sales through word-of-mouth and became a hit. It has been re-released on several consoles and is considered a sleeper hit, a cult classic, and one of the best video games of all time. 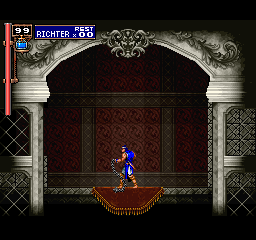