Capcom vs. SNK: Millennium Fight 2000 (カプコン バーサス エス・エヌ・ケイ ミレニアムファイト 2000, Kapukon Bāsasu Es-Enu-Kei Mireniamu Faito Nisen), also known as simply Capcom vs. SNK in international releases, is a 2000 head-to-head fighting game produced by Capcom originally released as a coin-operated arcade game for Sega's NAOMI hardware and later ported to the Dreamcast. It is the second game in the SNK vs. Capcom series and the first game in the series to be released for the arcades.

The sequel, Capcom vs. SNK 2, featuring tweaked gameplay and more characters, was released the following year. 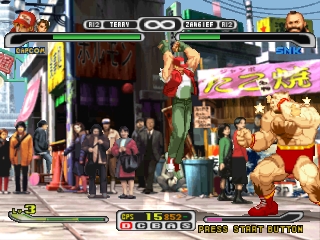