Bloody Roar (ブラッディロア, Buraddi Roa) is a series of fighting games created by Hudson Soft, and developed together with Eighting. The series has been published by multiple companies, including Virgin Interactive, Activision, and Konami. Konami holds the rights to the franchise after Hudson Soft was absorbed into the former company in 2012.[1]

The series began in 1997 under the name Beastorizer. The game's theme incorporated anthropomorphism, where the player has the ability to transform into a half-human, half-animal creature known as a Zoanthrope (the name came from the clinical term, 'zoanthropy', which is similar to that of lycanthropy). The game would appear under the name "Bloody Roar" when ported to the PlayStation in 1998, which would become the permanent title thereafter. 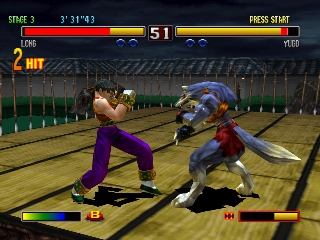