Ace Combat 3: Electrosphere[a] is a combat flight simulator video game developed and published for the PlayStation by Namco. It was released in 1999 in Japan and in Europe and North America in 2000. The third game in the Ace Combat franchise, it features a more futuristic, science-fiction motif compared to the more modern-day theme in other titles. Players control one of several types of aircraft and must complete each mission objective, which include destroying a fleet of enemies or protecting a base from fire.

Directed jointly by Takuya Iwasaki and Atsushi Shiozawa, Electrosphere was designed after its predecessor Ace Combat 2, borrowing many design elements. The team wanted the storyline to be an integral part of the game and serve an actual purpose, unlike earlier games in the franchise where it was secondary to the gameplay. Its futuristic landscapes were inspired by a combination of 1970's-esc city designs and modern-day architecture. Electrosphere has gained infamy for its drastic differences in content in the Japanese and international releases; Namco intended to retain the Japanese version's two-disc campaign and massive storyline, but due to financial constraints was severely cut down for North America and Europe.

Despite a lackluster marketing campaign and Namco remaining relatively silent towards the project, Electrosphere sold little over one million copies, and was later reprinted under the PlayStation the Best budget label. The Japanese release received positive reviews and seen as heavily ambitious in its design. International releases received a polarizing reception, with critics expressing great confusion towards the significant lack of content and bland gameplay. In later years, the game has received notoriety for its lukewarm localization efforts, with Ace Combat fans creating English patches for the Japanese release and requesting that Bandai Namco Entertainment publish an official translation for Western audiences. 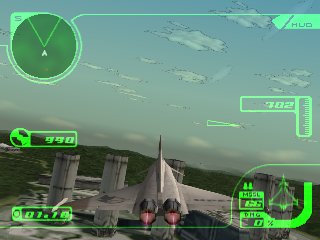